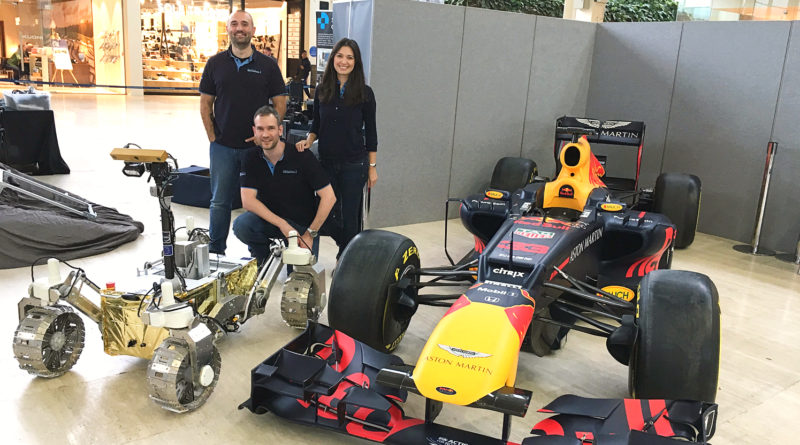 This October the LUVMI-X Lunar Rover working prototype took a trip over the English channel to join DIAL at the annual MK Innovates STEM exhibition in Middleton Hall, Centre:MK. This year was set to be the most extensive display for DIAL, exhibiting six of their space tech projects including three interactive demonstrations.

The MK Innovates STEM Festival celebrates a third year championing children and young adults into careers in science and engineering. It delivers a multitude of interactive activities from organisations across the city, showcasing career opportunities and tech projects. Remote control car racing, virtual reality journeys, making paper brain hats, building with straws and playing noughts and crosses with AI robots were amongst some of the entertainment and learning on offer.

The 3D surface camera SURFCAM that will be mounted on the surface drill of LUVMI-X invited guests to guess which household condiments were displayed in microscopic 3D. A Jetbot Nano robot was trained to demonstrate artificial intelligence used for autonomous movement: children were invited to plant and move obstacles, observing the entertaining mini robot pick up the meteorites and avoid the rocks. Autonomous navigation is currently being developed for LUVMI-X and DIAL are also building the rover’s navigation camera NAVCAM.

The LUVMI-X virtual reality moon simulator also returned another year, offering the user an experience of driving the lunar rover across the moon’s surface in search of its lander and taking in awesome views of the milky way, sun and earth as you would see from the moon’s surface.

Schoolchildren and the public were given a visual walk and talk through the history of space exploration rovers including footage taken from the surface of the Moon and Mars. All guests were bestowed with illustrated LUVMI-X stickers and invited to use them or their wild imaginations to draw a cartoon of the lunar rover’s adventures on a cartoon strip. Over 150 participants shared their cartoon drawing skills with us and came up with exciting adventures for LUVMI-X including meetings aliens, swimming in the ocean and saving the planet!

The MK Innovates Festival will return for a fourth year on 9-10 October 2020.For more information visit MK Innovates.